Hong Kong style cafes have always been one of my favorites because one can order both the western style dishes as well as tradition Chinese favorites, in addition to a wide selection of drinks such as the popular Hong Kong Milk Tea, YuanYang (HK style milk tea with coffee), Red Bean Drink, … 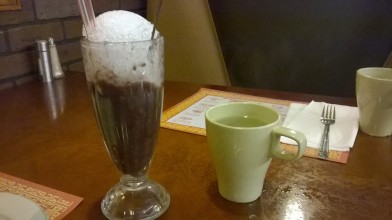 Instead of going to the same ones over and over again, I decided to visit Sunday Bistro, one that I have not been to for years. It is situated in a strip mall on Valley Blvd in Alhambra. The restaurant is fairly roomy inside with comfortable booths on one side.

The menu is quite extensive just like many of the HK cafes. But the one dish that caught my attention was the Braised Sea Cucumber with Mushroom at the price of $10.95. Sea Cucumber has always been one of my favorites, and the dish is usually rather pricey in restaurants. I did not hesitate at all in ordering that.

I was ready to accept a small plate with just a few thinly slices of sea cucumber at that price. Needless to say that I was totally, pleasantly surprised when the plate came with more than 10 good size pieces of sea cucumber and ample mushrooms and very fresh mustard greens at the bottom. Both my companion and I were incredulous as to how they could serve so much of the sea cucumber at such as price, and the dish was executed really well with everything cooked perfectly.

The other simple dishes that we had ordered such as the Wonton Noodles and Porridge were all fairly decent. Despite some criticism of poor service at Yelp, I thought the staff was quite attentive, and the waitress actually listened to my request of not adding extra salt to the food.

The only complaint for me would be that the patrons are allowed to smoke in the front outdoor patio area, and the smoke can be smelled even inside the restaurant. 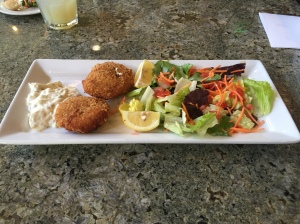 Somehow I have managed to visit this eatery three times already in the past month. Once with my son when they sent us an email for a free entree for his birthday. And the two other times with the Groupon deals that were too good to pass up. 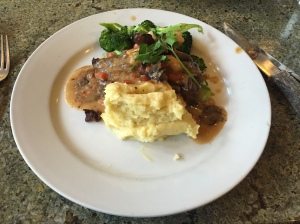 The atmosphere of this place is casual and relaxed. The outside of the restaurant actually looks more modern than the inside. My son, as well as my dinner companion all had the Filet Mignon and Shrimp all three times that I was there. The filet mignon was executed really well every time, tender and flavorful.  I tried the Lobster and Shrimp Linguine during the first visit, but found the portion size to be small and without much lobster. For the subsequent visit, I had the Braised Petrale Sole which was served in a deep elongated dish covered with a pear tomato sauce. This dish had so much sole inside that I was not able to finish the entire serving. 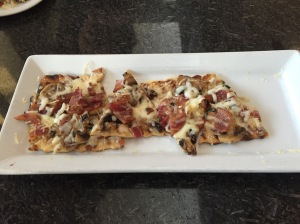 The Roasted Mushroom and Bacon Flat bread that we ordered as appetizer was a tad salty for our taste, but quite ample in portion size. We tried the Jumbo Lump Crab Cakes during our third visit, and found that to be moist, tasty and not too heavy. Our dinner came with cocktails of our choice so I tried the Cadillac Margarita, and Raspberry Lemon Drop during two of the visits. Being that I am not a frequent drinker, I felt buzzed after just a few sips, and did not finish the drinks.