Had a pretty good lunch at Tasty Garden in Alhambra before going to a job.

The job finished quite a bit earlier than expected so I had some time before my other assignment in Chinatown. So I decided to have some coffee at the Coffee Zone in Monterey Park. I wanted a quiet place to sit and relax, and I remembered that Coffee Zone offers such an option. I ordered the Cappuccino while my friend ordered an Americano. 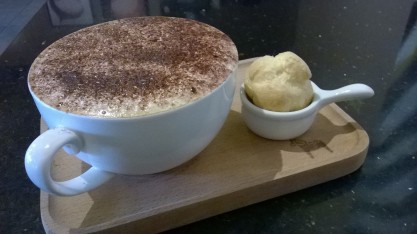 The cappuccino came with a little frozen cream puff on the side. I must say that the cappuccino was one of the best that I have had for a long time. Even though the espresso was not very strong, I found that the overall presentation and taste to be excellent, especially with the fine chocolate powder sprinkled on top. 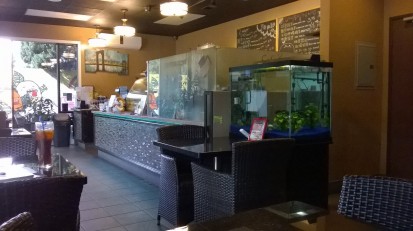 Although the time was around 5:00pm, we decided that perhaps we should have an early dinner. We chose a place called Ganache Patisserie and Cafe by Nicol on Atlantic since it was close by, and one that I have not tried before.

The restaurant is small and empty since it was not quite dinner time yet. The menu has numerous pasta options. The wall had photos of delicious looking desserts even though the waitress said that some of the desserts were not available, and that some did not really look like the photos.

I chose the Vegetarian Pasta with a tomato base sauce, while my companion ordered the Seafood Pasta. The servings of the pasta were not huge, but given that I was not that hungry, it was just the right size.

The chef did a good job on the pasta itself since it was still al dente. The taste was a tad sweeter than I would have preferred. The pasta came with sun dried tomatoes and mushroom, but I did not get too many mushrooms.

I wanted to try the desserts but was too full to do so. Overall, it was a decent place to try if one is not in the mood for Chinese food in that area.