Aside from my all time favorite fish – black cod, served either as Eun Daegu jorim(Braised black cod with radish, Korean style), or Grilled Black Cod with Miso (Japanese style), my other beloved fish throughout the years has been the Grilled Yellowtail Collar (Hamachi Kama).

An old friend that I have not seen for quite some time wanted to have the Grilled Black Cod, so we went to this small Japanese restaurant inside a stripe mall with a few other Japanese eateries.

Since the portion size of the Grilled Black Cod was rather small, I decided to get the Hamachi Kama (Yellowtail collar) as well, and an order of Soba with Seaweed, some Water Dumplings, some Uni sushi, and Sunomono (vinegared seaweed and cucumber).

The Black Cod was delicious as expected – buttery, light and flaky. When I brought home an order of the Black Cod to my son to try for the first time, after his first bite, his eyes opened wide and exclaimed in amazement how great it was!

The Grilled Yellowtail Collar, though not delicate like the cod, was in its own way, rich, flavorful, oily and very distinct in taste. The one served that day was huge in size, perhaps the largest that I have seen so far, for the price of under $15. There were so much meat, I especially like the dark meat portion near the bone, so lusciously delightful. 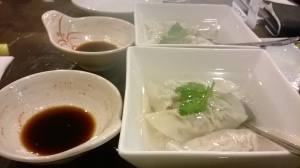 I was surprised by the Water Dumplings, I did not realize that they were served in cold water. After the initial shock, I actually enjoyed them quite a bit, and ate four of them. 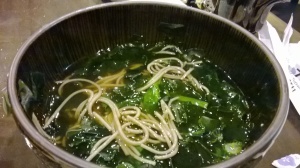 The Uni sushi was not as good as I had anticipated. The Seaweed Soba, warm and comforting, filled with soft wakame and green onion, provide a satisfying ending to the meal. 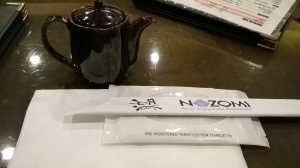